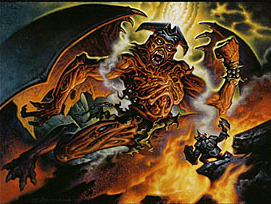 A Lord of the Pit, a powerful demon.

Demons (also known as devils) are malevolent supernatural beings. Demons are typically associated with temptations, lack of inhibitions, and dark magic. Demons are characterized by the absence of a soul.

Demons are distinct from vampires or zombies, which are undead creatures.

Demons don't have a uniform appearance. Demons can be either humanoid or monstrous in appearance, with or without wings, horns, and/or a tail. The surface of a demon is typically colored black, dark grey, dark brown, or red. Some demons do not have a corporeal appearance, and must possess a mortal being.

Demons are known for malevolence. Depending on the type of demon, they are either scheming to bring about the downfall of a person or civilization, tempting someone to commit immoral acts, or just causing havoc.

Demons are known to make deals with mortal beings, in which the demon will use its dark powers to the benefit of the mortal, in exchange for some payment (usually the mortal's soul). These contracts are enforced by demonic magic, which will punish the mortal if he or she attempts to renege on the deal.

Being supernatural beings, demons often have strength above the average human. Demons may possess psychic abilities such as mind control, persuasion, and psychokinesis. Demons may also have the ability to control fire or cause intense pain in opponents.

Demons typically live in infernal, dark areas. Hell is known to be home to many demons.

Demons play a prominent role in the mythologies of many societies, where they will often represent evil itself. Many religions have a chief demon, referred to as the Devil, who is the main opponent to a benevolent god or gods.

Some demons have cults built around them. The cultists build rituals of worship around the demon, often offering it sacrifices to curry its favor.