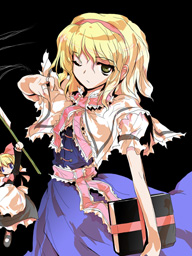 An example of a magician.

Magic is the reversal of entropy, usually by biological or psychological methods. It is both used by humans and other species, such as Pokemon, and can be used to do many, many things. Magic is said to be powered by the meisasphere in many universes.

It is an arcane science in general. It is an abstraction of things, whereas technology goes very deep down to pure forms; including particle physics and mathematics. It is ironic that magic happens to be quite difficult to learn, for it is technology that can be quite baffling, while abstraction is thought to be more human-friendly.

While it does give the user powerful abilities, they must still know how to manipulate magic in a way to achieve the goal they have, or it will have catastrophic results. Those who know magic are known by many names, including "magician", "magus", "mage", "wizard", "witch", "sorcerer", or "warlock".

It is widely believed that only magic can defeat magic; that is, in order to effectively fight against a magician, one must use magic themselves.

Usually this results in various forms of life, especially humanity, becoming much more magically powerful, sometimes to the point that the average person living in that area could be considered to have magic. Sometimes, however, the meisasphere can exert strange effects on the physical world as well, altering reality in that location. In fact, this has created many species of lifeforms.

Another way to explain the separation of magic and technology, is that technology is the usage of humanity's knowledge of physics to do what one wishes. Magic is entirely bio-centric and is influenced and given shape by the mind, although technology can be made to use magic. Preexisting forms of magic often continue to work after they have been conceived, and they are very hard to change by will of mind if they are commonly used, and can only be appended to, but sometimes huge and significant disturbances in the collective thoughts of a species can disrupt magic.

Finally, a simple way to describe magic is to say that it is the manifestation of sentient thought. This has led to, as of yet unproven, theories suggesting that human consciousness comes from magic, so without the meisasphere, it couldn't exist.

The magical ability of a species defines the likelihood for an individual to be able to use magic. Although there are species better than humans at magic, some of the best mages ever to exist were humans. The meisasphere also influences how easy it is for one to use magic, as in areas where the meisasphere is concentrated, even the most unmagical find themselves able to use a bit of magic in some way.

A magic circle sealing the entrance to a house in a dark and dreary world.

In many forms of magic, geometry is rather important. Magic circles are the most common geometric thing seen in magic, and also the most depicted. Most often they are drawn, on the floor or in sand, to create or boost an effect, such as magical teleportation. Magic circles look like a circle with usually either a hexagram or a pentagram, although other shapes are sometimes used, sometimes with or without other geometric shapes, symbols, or glyphs of a language.

The symbols have a defined meaning in magic, either because the magic caster knows very well what these symbols and/or characters mean, putting an impression onto the caster as they initiate the magic, or because these symbols have already entered the meisasphere, it being a matrix of sentient thought. In many ways, magic circles (as well as other, less common symbols not involving circles) allow the flow of magic to be structured, and it allows for the caster to ensure everything is accounted for without retaining them all in their mind.

Sometimes either a magic circle, symbols, or other shapes will involuntarily and visibly radiate from a person as they cast something. This is the result of the thought of magic powerfully radiating out and taking form due to the effects of the meisasphere.

Magic circles and other magic-related geometry can themselves hold magical effects after being drawn, in fact, they are quite effective at doing this.

Magic circles are quite often considered beautiful, and it has partially become an art.

The religions of angels often profess light magic, and forbid from using anything that is grayer.

Dark magic is defined as magic that has the potential to be used for evil and wicked intentions, to enslave or torment creatures and even harm and kill them. Light magic is said to be used by those who have only positive feelings and have no desire of vengeance, while dark magic is used by those with anger.

A magician who is skilled in the element of Darkness

Elemental magic is involved with elements commonly found in nature; they are natural phenomena. The most obvious elements are fire, water, wind, and earth, and they have been long known in magic due to their status as classical elements. However, there are other elements as well, including lightning and ice.

Not all of these elements are recognized by everybody. Just about anything could actually be made using magic, but only with enough practice. Some elements, especially the classical elements, are used and recognized so commonly that they are a standard aspect of magic. Some elements may just be a variation of another element.

Subtyping does not mean that mastery of a supertype leads to mastery of a subtype; rather some elements are put in a subtype because they are perceived to be at least similar to the above element. This is done because not all elements are recongized. For example, "holy" might be said to be just a slight variation of "light", or the same thing. Or vice versa.

From an unknown location, these crystallized orbs hold within them great magical power, usually relating to elemental magic.

Healing magic pertains to the restoration of health in a life form, and repairing its bodily structures. Healing magic is advanced in some universes; it can commonly be used to restore a person from near-death to nearly-fighting health over the course of a few days. Lost limbs and single organs can often be regrown with magic, and potions are often used to mend broken bones, even when they have been smashed to many pieces.

Healing magic is often used by adventurers and fighters, and people will take advantage of it to go to more extreme and dangerous lengths in training in order to get better experience. Some militaries are equipped with magic healers to support soldiers in combat. Hospitals of magic can be found in many places where magic exists, even in poorer places, and they tend to displace technological hospitals.

It is also known to be able to extend a person's lifespan, and the average lifespan of species are generally unintentionally extended anyway with exposure to magic-using environments, similar to how technology and medicine will extend average lifespans.

Healing magic is often criticized as making people generally more reckless, as they are more likely to do potentially deadly things. Although magic is very good at healing, it cannot always compensate for serious damage, and only the best magicians are able to actually resurrect a person from death. 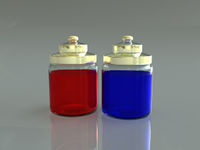 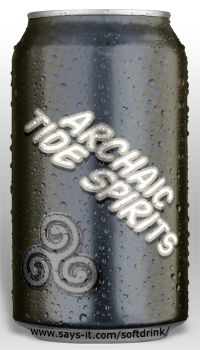 A magical soda that restores mana.

Potions are a type of liquid imbued with magical properties, that usually magically affects whoever uses them. They are usually drank, but can also be injected or used externally. Potions are a very effective way of changing the physical status of a life form, although potions are occasionally made to instead have an effect on the physical world when used, and sometimes they're not even meant for consumption at all.

Potions can either have positive or negative effects, or both. Positive effects of potions most often heal the user or boost their abilities, among other things. On the negative side, they can be used as a highly effective poison, as a method of mind control, a way of enslaving a person's mind (or heart), etc.

They appear in a large range of many different colors and appearances, and are often stored in glass containers to clearly show their visual properties.

They are either made from many different ingredients, or can be water or juice with a magical effect forced into it. Mushrooms are often used in potions.

Magical soda have been marketed as a type of potion with fizziness and soda-like flavor. Quite frequently they do have an effect on the drinker, but it is possible for them to become detrimental if consumed too often.

Summoning magic involves bringing things from other areas. Magical teleportation is also very similar to summoning, except the former sends away something, while the latter brings it to where you are.

It is most often used to bring creatures and even human servants to your aid, for purposes in battling. Summoning can also be used to bring spirits over, or make contact with things of godly power. It is often considered a form of "dark" magic, in that it can be used for wicked purposes.

In some universes, it was used to summon demons from hellish places for purposes of evil, and demon uprisings were conducted this way.