From Infinitypedia
Jump to navigation Jump to search
This article is written from an in-universe point of view. An article meant for wiki authors can be found on Infinitypedia:Omniverse.
This article may be confusing. Keep in mind to treat this concept as a tool for storytelling, rather than firm rules to be followed.

Why it is both possible and impossible to destroy the Omniverse

People often mistake the Omniverse, as promoting the idea behind Predestination, or not having total control over your own actions. When in fact it is the opposite; The free will of an individual is one of the things that crafts a new universe that branches out infinitely.

A multiverse is a group of multiple universes and/or multiple sub-multiverses, which can either exist as an abstractly-defined concept or exist as a physical structure in the Omniverse. Universes are often grouped together by their relationship to each other, either because they all share something in common, people are traveling between these universes, or because they exist within some contiguous space.

Physical multiverses are groups of universes that are physically connected in some way. Thus, inhabitants of these multiverses can travel between it. 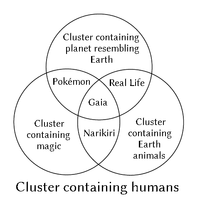 A Venn diagram illustrating the concept of multiversal clusters and their overlap.

Multiversal clusters, a major subclass of physical multiverses, are the largest subunit within the Omniverse. They are more specifically divided into two types: general clusters and local clusters.

Local clusters are contained within general clusters, and do not have well-defined boundaries and can overlap with many other local clusters in a way that suggests the Omniverse is more than three-dimensional. They are formed from similar universes clustering together, so they can be defined as a group of universes that share common traits; physical properties found within the universes, common species such as humans found in these universes, similar planets and cultures, or similar events.

Exoverses, the most common type of physical multiverses, are multiverses most similar to universes in the sense that, like a typical universe contains multiple galaxies within a tranversable space, an exoverse contains multiple universes and possibly other exoverses within a tranversable space. They often contain a finite number of universes, and the universes are often unique within the exoverse.

Another similarity to universes is the fact that exoverses can contain physical objects and even lifeforms within their "space between universes". In fact, an exoverse may even be a normal universe, except for the fact that it itself contains other universes. There have been many cases within the Omniverse of universes essentially turning into exoverses.

A universe, also often called a dimension, is a distinct body of space and time that contains matter and energy, often contained within multiple multiverses. They are defined as the locations where events primarily happen, and they rarely contain their own "universes", though they may have pocket universes strongly attached to them, and they are frequently connected to other neighboring universes.

All potential derivatives of a single setting and the events contained within are typically referred to as "alternate timelines" within the same universe. As universes act as the locations where events primarily happen, they can be observed as tight, growing bundles of timelines that occasionally split off to make new universes.

A timeline is the largest subunit within many universes, comprised of a connected set of frames of space in a sequential order. Many universes have an exponentially growing number of them, and the number of timelines contained within an universe is often unfathomable.

An offshoot timeline is created whenever a quantum event occurs in one direction or another. As the differences between these two outcomes tend to be small, the distance in the n-th dimension which measures change in the future is relatively insignificant. If viewed from a distance, the innumerable tiny shifts creating offshoot timelines would appear to be as a rope, with the various insignificantly changed timelines wound back in on each other and creating a measurably thick line through the n-th dimension. This sizable, distinct weaving of timelines is called a universe.

If such changes should occur such that the distance between two timelines is noticeable of its own merit, then a branching point can be observed. This branch will then run somewhat parallel to the original timeline, but will eventually cause other minor offshoots via its own quantum events. The process culminates in two "alternate timelines" occurring in close proximity to each other.

Note that upon close enough inspection, every individual timeline is the result of a branching point. The difference for a designation of an "alternate timeline" or an "alternate universe" is that the branching occurs on a level much higher than the individual quantum events which cause the thickening of timelines.