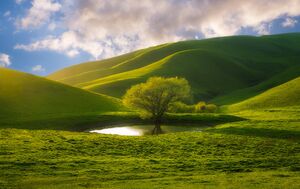 The world Origin is the first planet orbiting the Whitestar in its namesake Origin system in the Creation Realm. It is the birthplace of the Fae.

Much of Origin is covered in rolling hills and groves of trees, with many small lakes scattered across its surface.

The Marks of Origin

On it's north, south, east, west, fore, and aft faces, as well as in the center of the planet and in each of its nine moons, is a cubic Mark made of prima materia, which are unaffected by anything around them, and cannot be destroyed. The marks were inscribed with lines all equally spaced apart from each other, 256 in all, which were for the measure of space. And every period of 16 moments, the marks glowed dimly along these lines for a moment. In the center of the planet lay the centermark, which rotated at a constant speed, and every 256 moments, it aligned with the other marks, and at these times the marks shone brilliantly. The moons of Origin also would align at regular intervals, at which times beams of light would shoot out of them, connecting them for a brief moment.

The Eastmark was half buried beneath the roots of a gigantic tree in the Eastern Forest, and the southmark sat, half submerged in the middle of a lake.